Today was A Day Without Immigrants in San Francisco.

I have enough privilege to take the day off from work to show up at a rally and help the crowd be bigger, livelier, and louder, especially when the goal is to shine a light on Donald Trump’s deadly concentration camps housing predominantly Hispanic and Latino migrants at the United States of America’s southern border. Oh yes I do.

Children are in cages, have been in cages, for months, in un-American and inhumane conditions, at the mercy, at the lack of mercy, in fact, of federal employees – people! American folk! – who are paid to treat them and keep them like that, and who obviously know they can get away with whatever abuse they wish to inflict upon them. Children have been separated from their families by and large by and in the name of the Republican Party, at the expense of all that is good about this country and about a nation that not that long ago still stood for freedom. Children are in cages, have. been. in cages. for months, because of, what, a regime of willing and witting (p)sycophants barnacling – they do not deserve the benefit of our doubt any longer – to the orange hemorrhoid/wannabe dictator in the White House.

The truth is unacceptable, and this situation, this criminality, is intolerable.

Que orgullo representar a Peru esta tarde, en el Civic Center de San Francisco, en frente a nuestro City Hall, in front of my mayor, among people who kinda look like me and sorta sound like and probably cook like me and strangers, neighbors, allies who also believe that a system that condones the capricious, racist, unnecessary persecution of families seeking freedom is wrong. 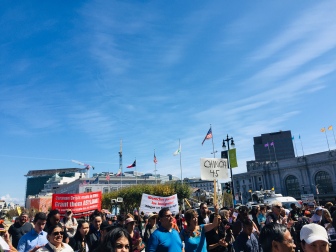 What a terrible reason to come together, but what an amazing opportunity to celebrate democracy and demand justice. One of the chants of the afternoon was, “Children Are Sacred.” If children are our future, then that means our futures are sacred. That means it is time to wake up (another rallying cry) and stop fucking around with our present. Especially with the clear and present dangers we all see and feel and about which we know.

Today was about accountability and about helping to amplify the voice and plight of the Latino and the Latino-American communities of this country. There were so many union workers present at this rally, and among the organization of it, and at the march from the Mission that preceded it, people who rightfully reminded everyone else in attendance they are, in no small measure, part of the reason this city keeps running. Our communities deserve to be heard. My community needed me today, and I was not only happy to show up, I was obliged.

I cannot vote yet, but I can make my voice heard, and I can share my time and energy. To be free is why I came to America, OK, and I will be damned if I don’t do my part, if I don’t #DoMore and show up and learn, too, to stand up for what is right and allow someone else their freedom.